When Apple opened its new Palo Alto store last month, everyone was impressed – for about a minute. The new store is an architectural vision, 5,000 square feet of glass walls, a curved glass roof, and Italian stone hand-selected by Steve Jobs himself before his death in 2011. The store is a spectacular sight, especially at night when it is flooded by strategically engineered lighting.

Unfortunately, this vision in glass and stone was designed and built with no noise absorption whatsoever in place. In fact, the noise from reverberant sound bouncing off all these hard surfaces is so hard on the ears, customers are visiting once and fleeing after a short time. The Apple 15 million dollar echo chamber has been described as “earsplitting,” “almost unbearably noisy,” and “one big noise machine.”

One visitor told her husband she would not return to the store after spending just a few minutes – she’s afraid of suffering hearing loss.

Are people exaggerating about the noise? Well, in his own blog “Minding the (Apple) Store,” Former Apple executive  Jean-Louis Gassée wrote that a visit to the store shortly after its opening did not have the impact he was hoping for. Gassée said the new store is indeed big, bold, elegant, but almost unbearably noisy.

The quintessential  testament to Apple’s success, painstakingly designed down to the most minute detail and meant to be a prototype for future stores, is an acoustical failure. Already people who have visited the store are refusing to return because of the high noise levels caused by sound reverberating off its entirely hard surfaces with no noise absorption whatsoever. 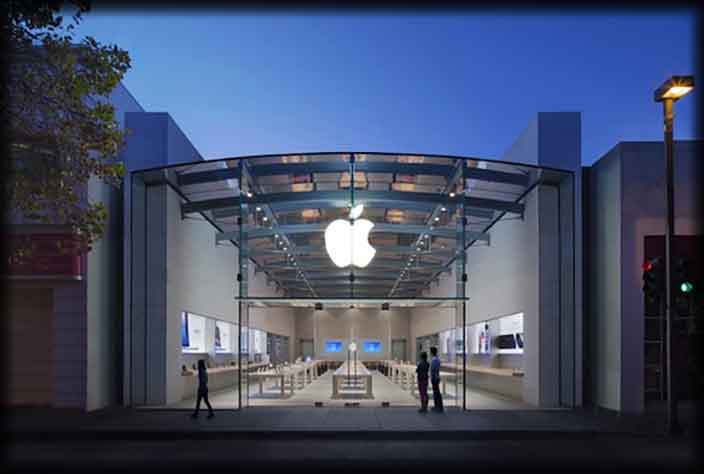 After his initial visit, Gassée returned a few days later with a decibel-measuring app he uploaded to his iPhone, and was stunned by findings. The sounds within the store measured above 75 decibels – five decibels higher than the 70dB threshold the EPA says can cause hearing damage from long term exposure.

Naturally the main question floating inside and outside the Apple organization at the moment is, “what were they thinking?”

Gassée even writes that the sound levels in the store are not just annoying – they’re dangerously high. Employees subjected to this level of noise for eight hours per day are at an elevated risk of hearing damage and loss, and for every hour beyond eight that someone remains in the store, the risk increases exponentially.
It’s not the first time that Apple ended up looking as if  it didn’t think things through thoroughly, although for the most part the company is known for its meticulous attention to detail; Apple generally enjoys a reputation of striving for excellence.

Nor is Apple the first company to blow a great architectural design by giving no forethought to acoustics either, especially in recent years when hard surfaces and minimalist design have become highly desirable.

But it has to be discouraging that the reverberant noise and deafening acoustics, for which hard surface structures are notorious, slipped past the architects and contractors, and came as a total surprise to everyone only after the store opened.

Gassée likened the failure to the recent Apple Maps catastrophe.

“An obvious problem ignored,” he said.

When all was said and done, Gassée found that the inside of the store measured a full 10 decibels louder than the street traffic noise outside on high-trafficked University Avenue. When you’re talking decibels, sound pressure doubles for every three decibel increase in the environment. That said, a 10 decibel increase makes the noise inside the Apple Store about 10 times louder than the street noise outside.

It should be interesting to see who is held to the proverbial fire over this blunder, but to their credit, Apple is studying the noise problem and working on an answer.  And although there’s no telling how long it might take, there’s little doubt the company will resolve the issue.

They’re Apple. They can do anything, right?