Fracking: A Controversial and Noisy Energy Process: Part 2 of 2

Fracking is a Noisy Business

Fracking wells can be located near homes, schools, and other places that are normally located away from industrial businesses. Many people and families across the country are publicly expressing their concerns about having to be so near fracking gas wells and about the non-stop fracking noise the operation creates for their neighborhood.

Sources of Noise in a Fracking Operation

Anybody who has been around an oil or gas field knows that it is a loud environment. Operating heavy equipment to move earth; shape a pad-site; erect a drilling rig; supply the well site with materials, tools, etc. via semi trucks; and run all the equipment necessary to set up and drill a well is a very loud operation that lasts 25-45 days, in most cases. To surrounding neighbors, some of those noises are irritating and offensive, but some of them are harmful. Specific sources of fracking-related noise include:

• Site preparation – Activities that cause noise include ground clearing, grading, waste management , vehicular and pedestrian traffic, and construction and installation of facilities. A quote from an article found online described it as, “It sounds like setting up for a circus more or less. You got them coming in setting up pad sites and putting up the walls, then the trucks start rolling in and you don’t know where they are coming from but they just keep coming.”

• The fracking process – Primary sources of noise during the drilling are equipment drill rigs, and diesel engines.

• Vehicular traffic / heavy trucks  – Fracking requires large quantities of sand, water and chemicals at a well site. Trucks also haul away the waste fluids from the drilling.  A single fracking job requires hundreds of truck trips, and each well is generally fracked up to ten times. The increase in truck noise on surrounding roads is exponential. 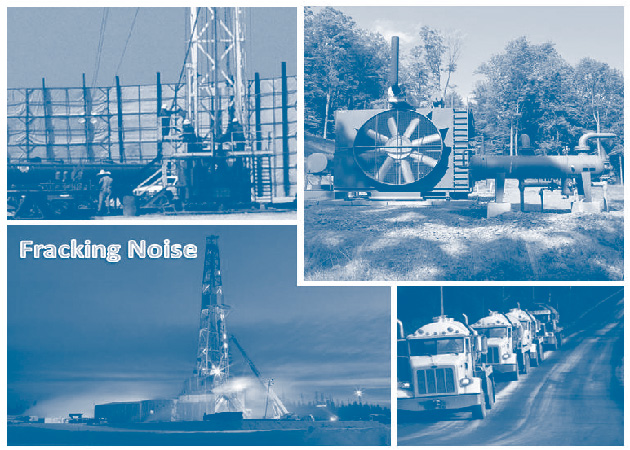 State and local noise regulations restrict the amount of noise, the duration of noise and the source of noise for fracking companies. There are usually noise level restrictions for certain times of the day. Many municipalities where drilling is allowed are requiring the use of sound baffling materials around a well site. A sound baffle is a construction or device which reduces the level of airborne sound. Sound baffles are a fundamental tool of noise mitigation, the practice of minimizing noise pollution or reverberation.

Many fracking companies say they are working to become better neighbors and address the concerns of community residents who live near the wells.